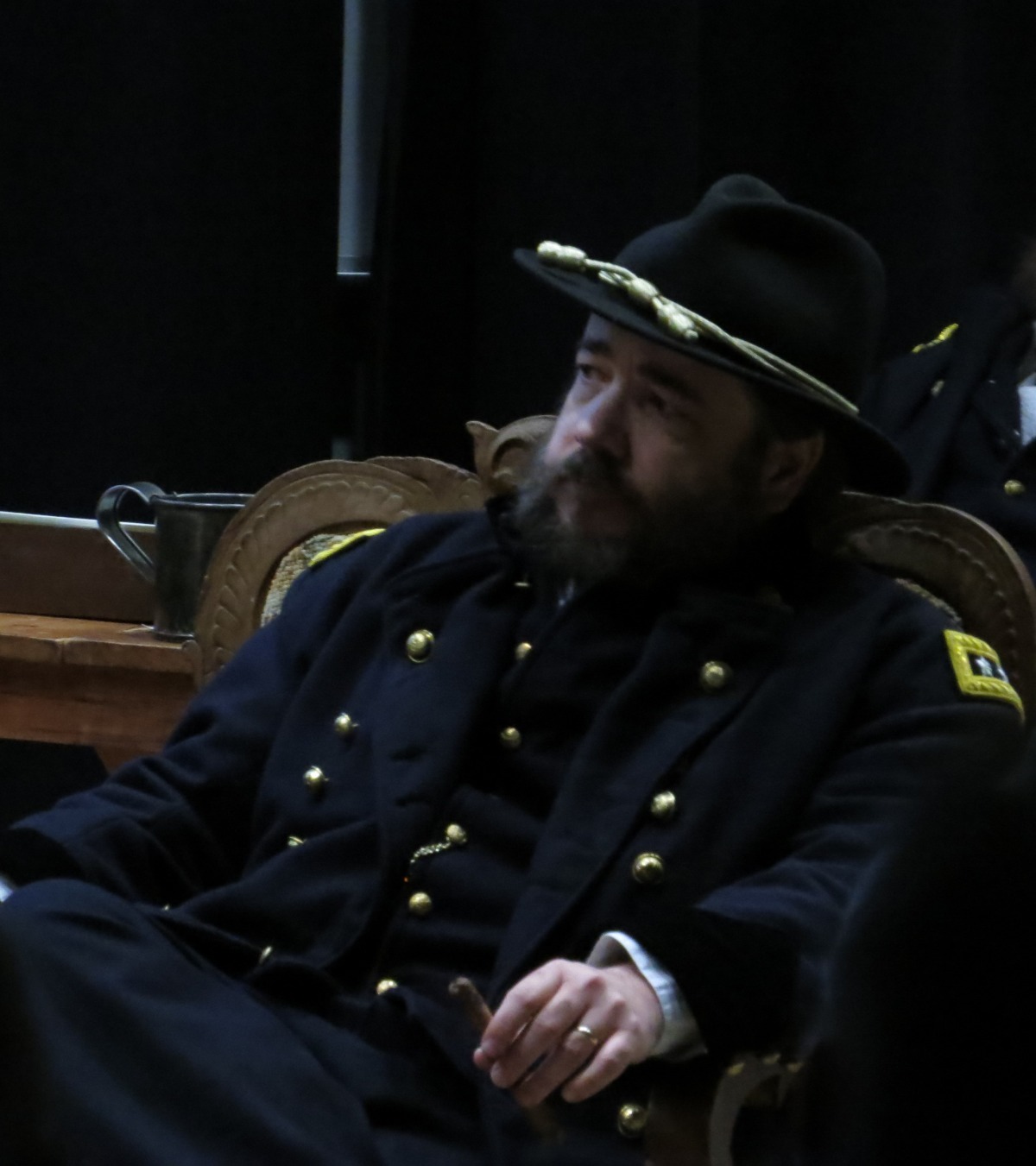 The pandemic has been a real bummer in many ways, including many Rudely Stamp’d shows cancelled. But things are looking up and requests for shows are beginning to roll in again. To celebrate, we would like to announce a new conversation available – “Grant on the Eve of Victory.”

Written and directed by Derek Maxfield, who also plays Grant, the play features Jess Scheuerman who portrays Townsend. Previously Scheuerman performed the part of Julia Grant in “Now We Stand by Each Other Always.”

“Grant on the Eve of Victory” will debut on Sept. 26th at the West Sparta, NY, Town Hall at 2:00 PM. The event is outdoors and open to the public.

Anyone interested in booking a show should contact Maxfield at ddmaxfield@genesee.edu or by calling (585) 478-3753. The play is designed for both outdoor and indoor performances. 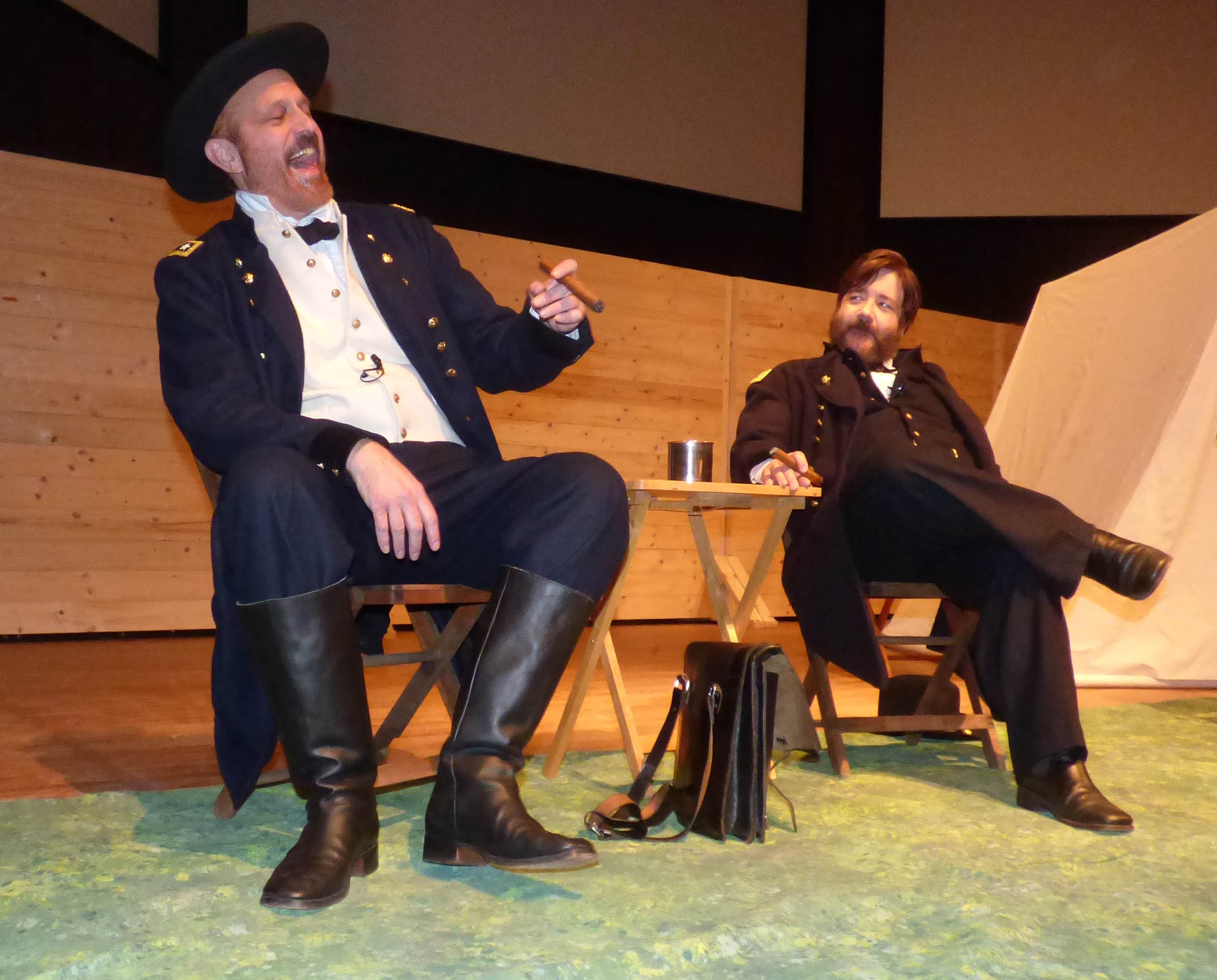 The winter campaign has certainly been a busy one for the generals!  We traveled to Florida in January, Ohio in February and have just returned from an incredible engagement in North Carolina.

Rudely Stamp’d presented “Now We Stand by Each Other Always” to a packed house of 597 for the Brunswick CWRT on March 3rd – our largest audience to date – and enjoyed a sustained standing ovation for our efforts!  It was a truly memorable occasion as we also added Julia Grant, played by Jess Scheuerman, for the first time too.

The spring campaign will kick off in April as the trio head to Butler, PA on April 9th, and Naples on April 18th for the Bristol Valley Theater.

To book a performance, contact Derek Maxfield at ddmaxfield@genesee.edu or call 585-478-3753.

Rudely Stamp’d is pleased to welcome a new player to the mix – Jess Scheuerman.  Recently introduced in a performance for the Brunswick (NC) Civil War Round Table, Jess made her debut as Julia Dent Grant in our play “Now We Stand by Each Other Always” before an audience of over 500.

A reference librarian at Genesee Community College, Jess is a graduate of Adelphi University and the University of Buffalo.  She grew up in Kendall, NY and is the daughter of Bob and Linda Rossi.  A passionate Harry Potter fan, Jess also loves history and intends to pursue an M.A. in history in the near future.

Julia Dent Grant (1826-1902) was the wife of Gen. Ulysses S. Grant.  Born near St. Louis, MO, Julia was the daughter of Col. Frederick and Ellen Dent.  She and Ulysses had four children together – Fred, Ulysses, Jr., Nellie and Jesse.  A frequent visitor to the Civil War camps where her husband served she went on to be First Lady of the United States.

Julia makes her appearance in the play in act III when Sherman and Grant meet at City Point to plot out an end to the war.

The general himself, portrayed by Tracy Ford, will be there to assist in the celebration in Sherman’s home town.  As part of the festivities, the theater group Rudely Stamp’d will perform two acts from their critically-acclaimed play “Now We Stand by Each Other Always” – featuring Ford as Sherman and Derek Maxfield as Gen. Ulysses S. Grant.  By day, the men are mild mannered professors at Genesee Community College in Batavia, NY.

Performed now almost two dozen times in venues across the country, “Now We Stand by Each Other Always” features conversations between Gens. Grant and Sherman at critical times during the Civil War.  Act I takes place at Vicksburg, MS, as the men plan for the fall of the city to Union forces in July 1863.  Act II portrays a meeting between the generals in Cincinnati, Ohio, as the men plan for the Atlanta and Overland Campaigns in 1864.  Finally, Act III takes place at City Point, Virginia, as Sherman briefs his chief about his wildly successful exploits in Georgia, during the March to the Sea, and his campaign through the Carolinas.  The generals also plot an end to the remaining Confederate armies.  Acts II and III will be performed in Lancaster.

Refreshments will be served, along with coffee and tea. A cash bar will be available as well. A delicious and creative birthday cake, donated by The Confectionary, will be cut and served to guests.

Tickets will be sold at the door for $45.

For more information about the play or to book a performance, contact Derek Maxfield at ddmaxfield@genesee.edu.

Mark your calendar for upcoming performances of “Now We Stand by Each Other Always”:

For more information or to book a show, contact Derek Maxfield at ddmaxfield@genesee.edu. 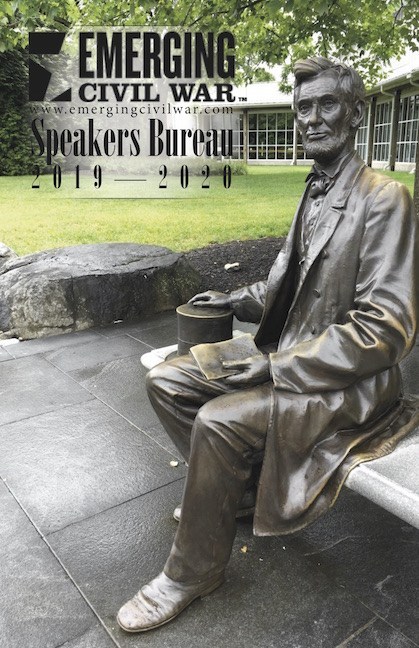 Our friends at Emerging Civil War have just released a new Speakers Bureau brochure for 2019-20.  It includes some of the most knowledgeable and dynamic people I have ever known (as well as a shortish history professor some of you know).  It is a special group of people dedicated to sharing their scholarship with a broad audience.  Check it out: https://emergingcivilwar.com/2019/08/07/the-2019-2020-ecw-speakers-bureau-is-now-available/

Rudely Stamp’d was recently featured in a podcast on Emerging Civil War, hosted by Dr. Chris Mackowski and Dan Welch.  The interview delved deep into the background and development of the play “Now We Stand by Each Other Always.”

Check it out here: https://emergingcivilwar.com/2019/08/06/ecw-podcast-rudely-stampd-is-now-available/

The Generals are on the rampage this summer as they perform “Now We Stand by Each Other Always” from town to town.

Fresh off their debut of all three acts in Pavilion, Gen. Grant and Gen. Sherman are preparing for shows in Akron, Attica and Medina.

The play is based on a series of conversations between the famous Union generals during the Civil War.  The friendship that developed between Ulysses S. Grant and William Tecumseh Sherman is a touching story on a personal level, but it also was a recipe for the success of Union arms.  Beginning at Vicksburg in 1863, the play has a nice arch that allows audiences to see the evolution of the partnership between the generals.

Be sure to mark your calendars for upcoming shows:

For more information about booking or attending a performance, contact Derek Maxfield at ddmaxfield@genesee.edu.

The upcoming performance of “Now We Stand by Each Other Always”, scheduled for Saturday, June 22nd at the Buffalo-Niagara Heritage Village has been postponed.  We are working at rescheduling for August or September.  Please stay tuned.

Join us Wednesday and/or Friday as we premiere our new acts! 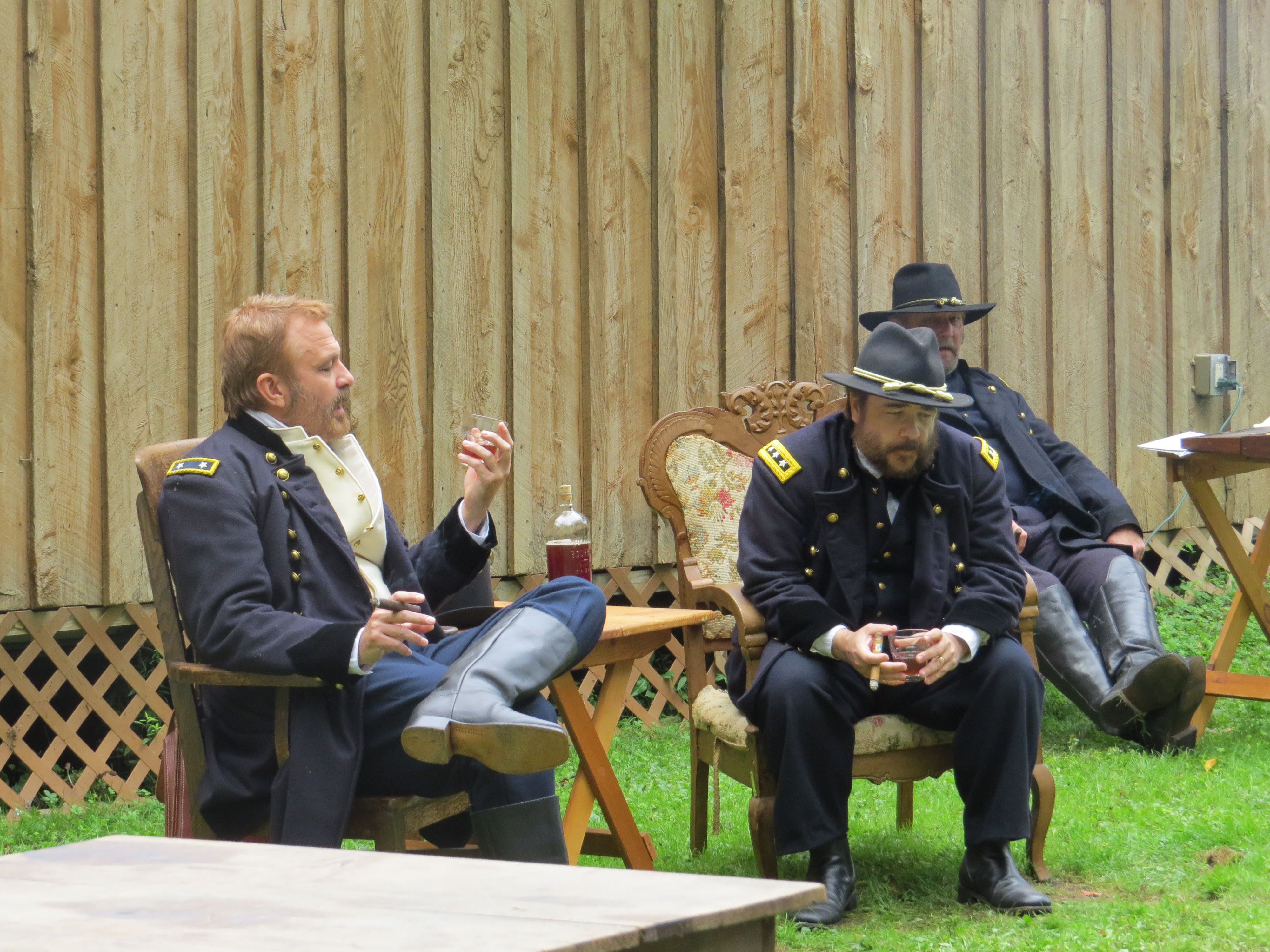 Gen. William Tecumseh Sherman once chided a critic of his friend and superior Gen. Ulysses S. Grant by responding that “Grant stood by me when I was crazy, and I stood by him when he was drunk, and now, Sir, we stand by each other always.”

That iconic phrase now serves as the title of a play that will be performed this week at the Pavilion Methodist Church, corner of routes 63 & 19, in Pavilion, on Wednesday, 6/19 beginning at 6:30 PM, and on Saturday, 6/22,  at the Buffalo-Niagara Heritage Village, Amherst, NY at 4:00 PM.

“Now we stand by each other always” was written and is directed by Genesee Community College professor of history Derek Maxfield, who also plays the role of General Grant alongside his GCC colleague Tracy Ford, professor of English, who is General Sherman. Collectively known as “Rudely Stamp’d,” the original one act performance debuted…